Make it Right: From Concept to Community: CAC 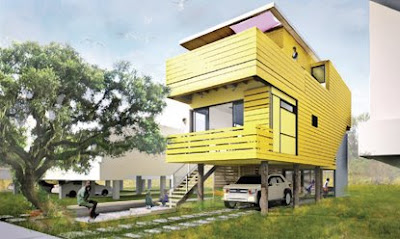 In December 2007, more than two years after Hurricane Katrina devastated the Lower 9th Ward, the once-vibrant neighborhood was still silent and razed and the community frustrated by the lack of rebuilding progress. After touring the area and meeting with neighborhood groups and families, actor Brad Pitt was moved by the injustice he saw to "Make It Right." Pitt created the Make It Right Foundation to help the Lower 9th Ward recover by building 150 affordable, green high quality design homes in the neighborhood closest to the Industrial Canal levee breach.

From Pitt's concept, a thriving and growing community has grown. Fourteen families now live on the site, 19 homes are under construction and another 49 families are in process. The first 13 local, national and international architects who contributed their designs to Make It Right based their work on the traditional New Orleans "shotgun" home. In June 2009, a second round of 14 architects submitted designs based on traditional New Orleans' "duplexes" (two-family homes). For the first time, the models of the duplex designs will be on display beginning August 1 at the Contemporary Arts Center in New Orleans. In addition, the exhibition, Make It Right: From Concept to Community, will trace the evolution of the first generation of houses from design to finished houses and thriving neighborhood, and detail the pioneering materials, processes and technologies being used in the Lower 9th Ward that will benefit communities across America.