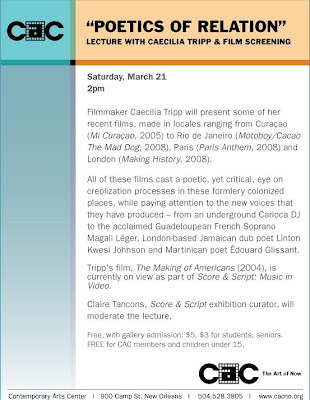 Filmmaker Caecilia Tripp, whose film The Making of Americans (2004) is currently on view as part of Score & Script: Music in Video, on view in the first floor gallery until April 5 , will present some of her recent films, made in locales ranging from Curaçao (Mi Curaçao, 2005) to Rio de Janeiro (Motoboy/Cacao The Mad Dog, 2008), Paris (Paris Anthem, 2008) and London (Making History, 2008). All of these films cast a poetic, yet critical, eye on creolization processes in these formlery colonized places, while paying attention to the new voices that they have produced - from an underground Carioca DJ to the acclaimed Guadeloupean French Soprano Magali Léger, London-based Jamaican dub poet Linton Kwesi Johnson and Martinican poet Édouard Glissant.
Poetics of Relation will be presented by Score & Script exhibition curator Claire Tancons.

Free, with gallery admission: $5. $3 for students, seniors. FREE for CAC members and children under 15 every day.