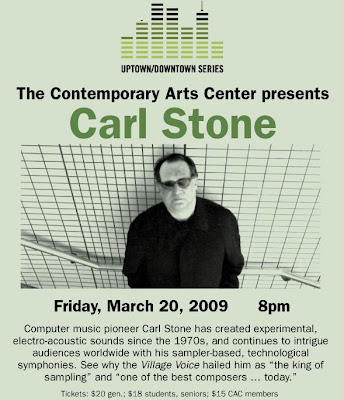 Carl Stone is one of the pioneers of live computer music performance, and has been hailed by the Village Voice as "the king of sampling" and "one of the best composers living in (the USA) today." Focusing strictly on electro-acoustic composition since the early 1970s, he works primarily in avant-garde, sampler-based composition, emphasizing the slow evolution of sound through thematic variation and recurrence. Stone's commissioned works have been performed in the U.S. (under such auspices as the National Endowment for the Arts and the LA Museum of Modern Art), as well as in Canada, Europe, South America, Australia, and, most often, Japan, where he's collaborated with dance companies and composed for film, video, radio broadcast, and multimedia installation.
Tickets: $20 gen.; $18 students, seniors; $15 CAC members
To purchase advance tickets: visit the CAC (900 Camp St.) from 11am-4pm or call the CAC Box Office at 504-528-3800. On day of show, tickets can also be purchased in person from 11 a.m. to one-half hour after curtain.