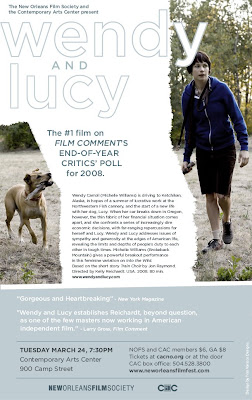 From the Contemporary Arts Center:

"Wendy and Lucy"
The Contemporary Arts Center and New Orleans Film Society present monthly screenings of independent films and shorts you otherwise won't see in New Orleans.
This month's feature is Wendy and Lucy, which was voted "Critics Choice for Best Film of 2008" in Film Comment, the country's leading film publication. Michelle Williams (Brokeback Mountain) gives a powerful breakout performance in this feminine variation on Into the Wild. Wendy Carroll (Williams) is driving to Alaska, hoping for a summer of lucrative work at the Northwestern Fish cannery, and the start of a new life with her beloved dog, Lucy. When her car breaks down in Oregon, however, the thin fabric of her financial situation comes apart, and she confronts a series of increasingly dire economic decisions, with far-ranging repercussions for herself and her dog. Wendy and Lucy is a poetic road drama that addresses issues of sympathy and generosity at the edges of American life, revealing the limits and depths of people's duty to each other in tough times. Co-starring Walter Dalton, Larry Fessenden and Will Patton. Directed and co-written by Kelly Reichardt (Old Joy).
Tickets: $8 general admission. $6 for CAC & NOFS members.
To purchase tickets: visit the CAC (900 Camp St.); or call the CAC Box Office at 504-528-3800.
at 3/24/2009 11:14:00 AM